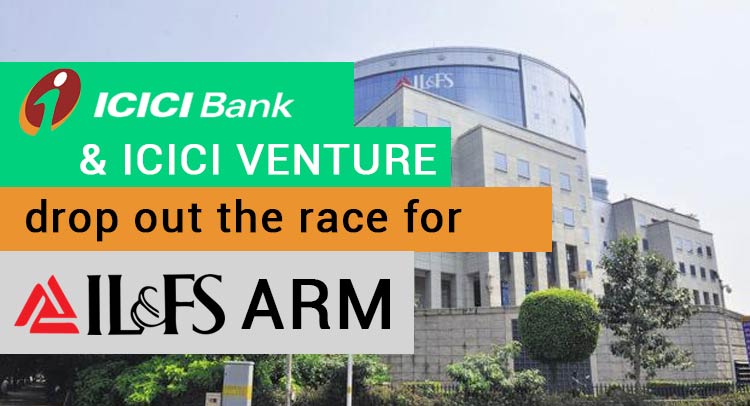 People with direct knowledge of the development has said that in order to buy the securities and private equity businesses of Infrastructure Leasing & Financial Services (IL&FS), ICICI Bank NSE 1.27% and ICICI Venture Funds Management have come out of the race. This is because of a likely variance of interest as the bank chairman GC Chaturvedi is one of the members on the recast board of the debt-laden financier. Raising a conflict of interest, the chairman of ICICI Bank GC Chaturvedi is now on the board of IL&FS. The bank is one among the dozen securities business buyers and it has pulled out after submitting the bid.

Among the seekers, HDFC Bank, Axis Bank NSE 2.87% and Rare Enterprises owner Rakesh Jhunjhunwala are also there to buy the securities business of IL & FS. India’s one of the largest private equity funds, ICICI Venture Funds Management Company and the bank’s private-equity arm, citing the conflict of interest, has decided against bidding for the equity business of IL&FS. The newly constituted board has blocked the IL&FS Investment Managers and the IL&FS private equity fund that manages around $2 billion. IL & FS Securities Services Ltd, the first IL&FS subsidiary expects the sale of ISSL to bring in about Rs 400 crore.

The securities business deal was previously struck with IndusInd Bank NSE 2.26% and Sebi which is the capital market regulator had given its approval for the proposal. Now the new management wanted to put the business up for rebidding and to follow a transparent bidding process which is assisted by the newly appointed investment banks J M Financial and Arpwood Capital. The financial advisors of the company are soon going to shortlist a buyer for the deal. The valuation of the company is expected to be around Rs 400 crore IndusInd Bank’s offer which also includes a corporate office in Mumbai. In the last financial year, ISSL which was incorporated in 2007 reported a profit of Rs 45 crore on Rs 324.5 crore revenue. On the customer list, it has more than 1000 broker client accounts and has foreign institutional investors and foreign portfolio investors. It is observed that the company does more than 3 million transactions every day on stock exchanges.
ISSL’s client acquisition remained strong on its three key verticals- clearing, custody, and fund accounting and its volumes had grown consistently over the years.