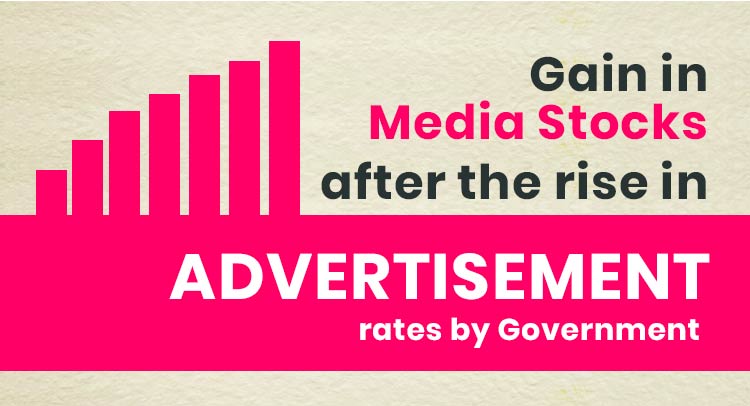 The ministry of Broadcasting and services has announced a hike of 25% over the advertisement rates in printed media. The new rates came into existence from Tuesday and will be valid for three years. Shares of India Print Media companies escalate as much as 1 percent along with the rise in the Nifty Media Index. The Government stated that the decision of raising the prices will be of great benefit, especially to the small and medium newspapers. There is a gain in Nifty Media index on heavy buying in DB Corp, Jagran Prakashan, TV Today, and Zee Media. The media index is 0.10% up at 2,498. By trading up 7%, DB Corp was leading the index’s gain.

Since October 2010, shares of HT media Ltd escalated as much as 17.5 percent to Rs. 45.95 in its biggest daily percent. Similarly 8.3% rise in Jagran Prakashan Ltd’s stocks and 8% rise in DB Corp Ltd’s shares. It is announced by the Government that the decision has been taken based on the recommendations of the 8th Rate Structure Committee constituted by the I&B Ministry. Before taking this decision the committee has considered several factors like processing charges, an increase in the price of the newsprint, and many other factors that are involved in the computation of advertisement rates. Such revision had taken place in 2013 during which an increase of 19% had been announced over and above the rates of 2010. Meanwhile, the Nifty50 rose over 56 points, or 0.53% to trade at 10,859 and the Sensex is up 229 points or 0.64% to trade at 36,209.